Pimp your Boots for winter

Spring is well on its way down here in the south and we prepare for the spring flush of freezer filler yearlings and blonde bull Tahr, for our friends in the Northern Hemisphere snow is starting to settle and the long winter is beginning.

Winter hunting presents a lot of challenges for the serious mountain hunter, short daylight, un predictable and severe weather, snow and ice are all a battle to contend with. But for some the lure of big winter skins and the hope that animals may be pushed to lower elevations is a big draw card.

This winter I did a bit of gear experimentation to try and combat what is a real danger and problem for hunters in the winter. Ice.

Ice comes in all forms and shapes but it all has two things in common. Its cold and its slippery! Modern crampon designs have solved most issues of traveling on frozen snow, glaciers ect. But there is a type of ice that is a real challenge to walk on. Verglas. 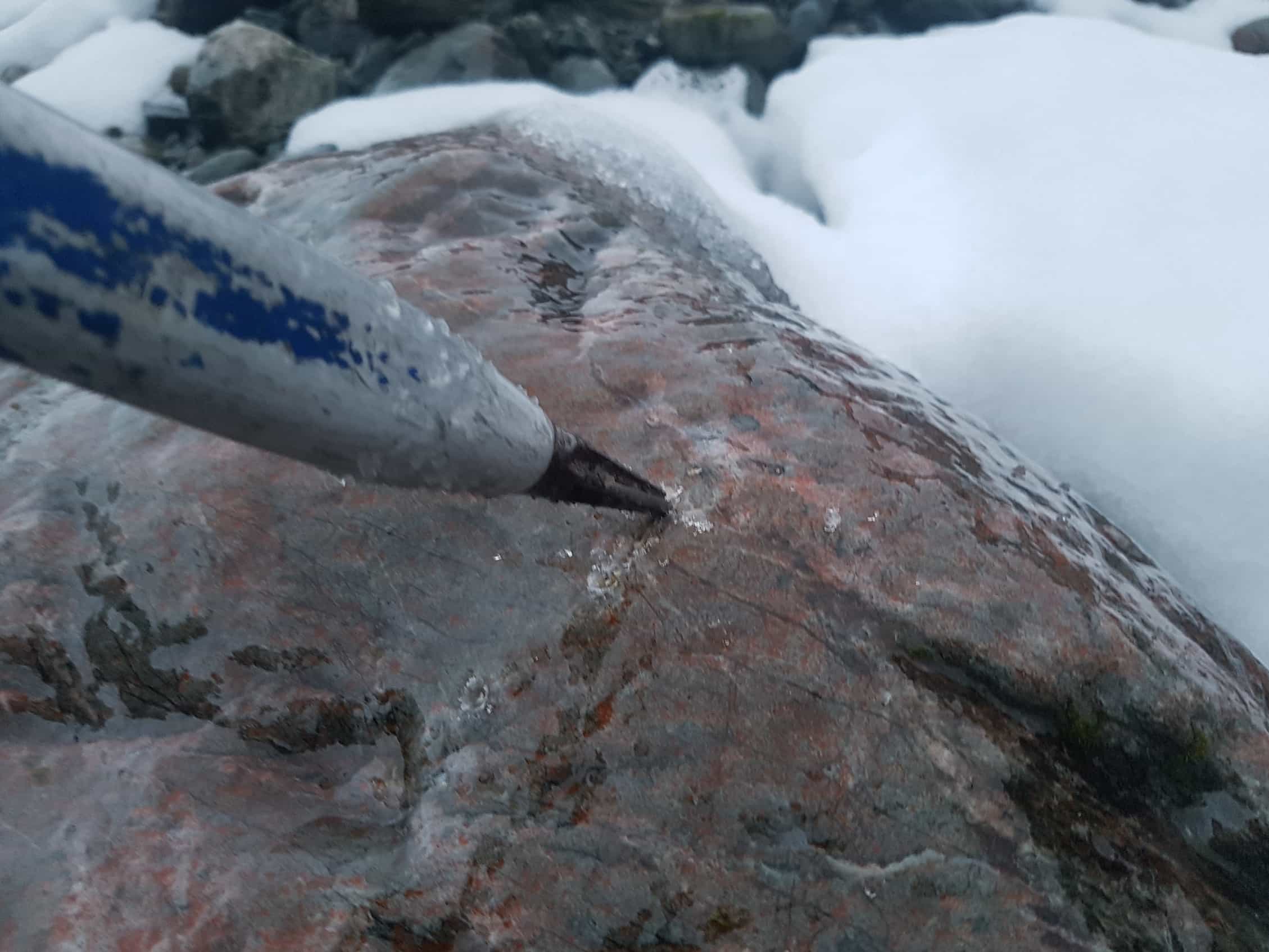 Verglas is the term used for a thin layer of ice found on a hard surface (normally rock) and Verglas literally means “glass Ice”.

We all have experienced the often painful and frustrating experience of walking up frozen creek beds and shingle slides, where often only 1-2mm of ice makes the normally easy navigated rocks into an ankle twisting knee breaking nightmare.

There are a few options in these scenarios:

No crampons and try and walk in the ‘gaps’

Or my preferred option- try something new…

Crampons are a great tool but on very thin ice on rock they often are not a lot of use and can be just as dangerous as not having them. Also in mixed terrain the chore of taking them on and off can become frustrating. They are an amazing tool that have revolutionized mountain travel, but they are only quite a recent invention and most of the world’s highest peaks had been climbed before their invention. Before crampons there was a world of nailed boots and heavy axes and general hard bastards. 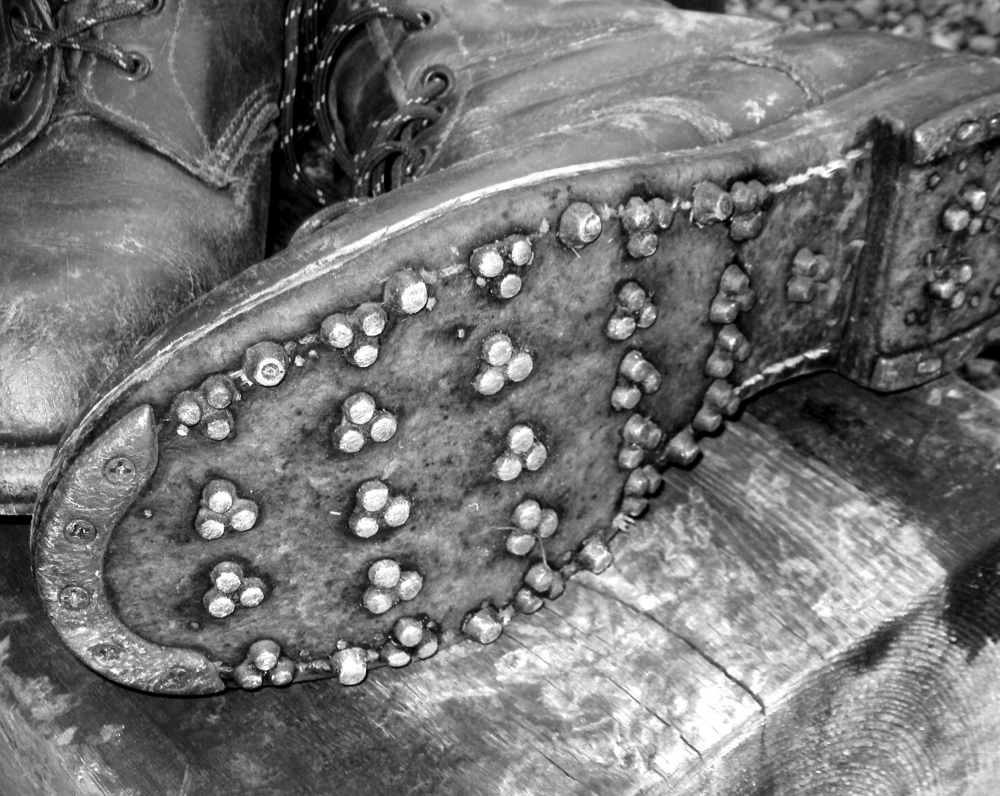 There is a huge array of ‘hobnail’ boots, nailing boots offered the user a customization to their boot we cannot achieve with rubber soled boots

There are still guys today that wear hobnails on a daily basis (believe it or not!) but the rubber soled boot has all but ended their reign on the mountains. While trying to get my hands on some real boots to nail (another ‘project’ I’m working on) I thought of an idea.

Why not a hybrid rubber sole and nail boot?

I am by no means the first to think this and Tricounis have been used for years (I believe the NZ forest service made it almost mandatory for cullers to wear tricounis due to safety at one point). I have also herd of guys using the odd screw in places on rubber boots.

While looking into this I came across “Kold Kutters”. ‘Kold Kutters’ are an ice screw made purely for rubber applications and used mainly in Ice racing (motor bikes,cars etc). I am sure there’s a few Canadians and Alaskans reading this saying ‘no shit sherlock’ haha but it was news to me that a product like this even existed (not much ice racing in NZ). 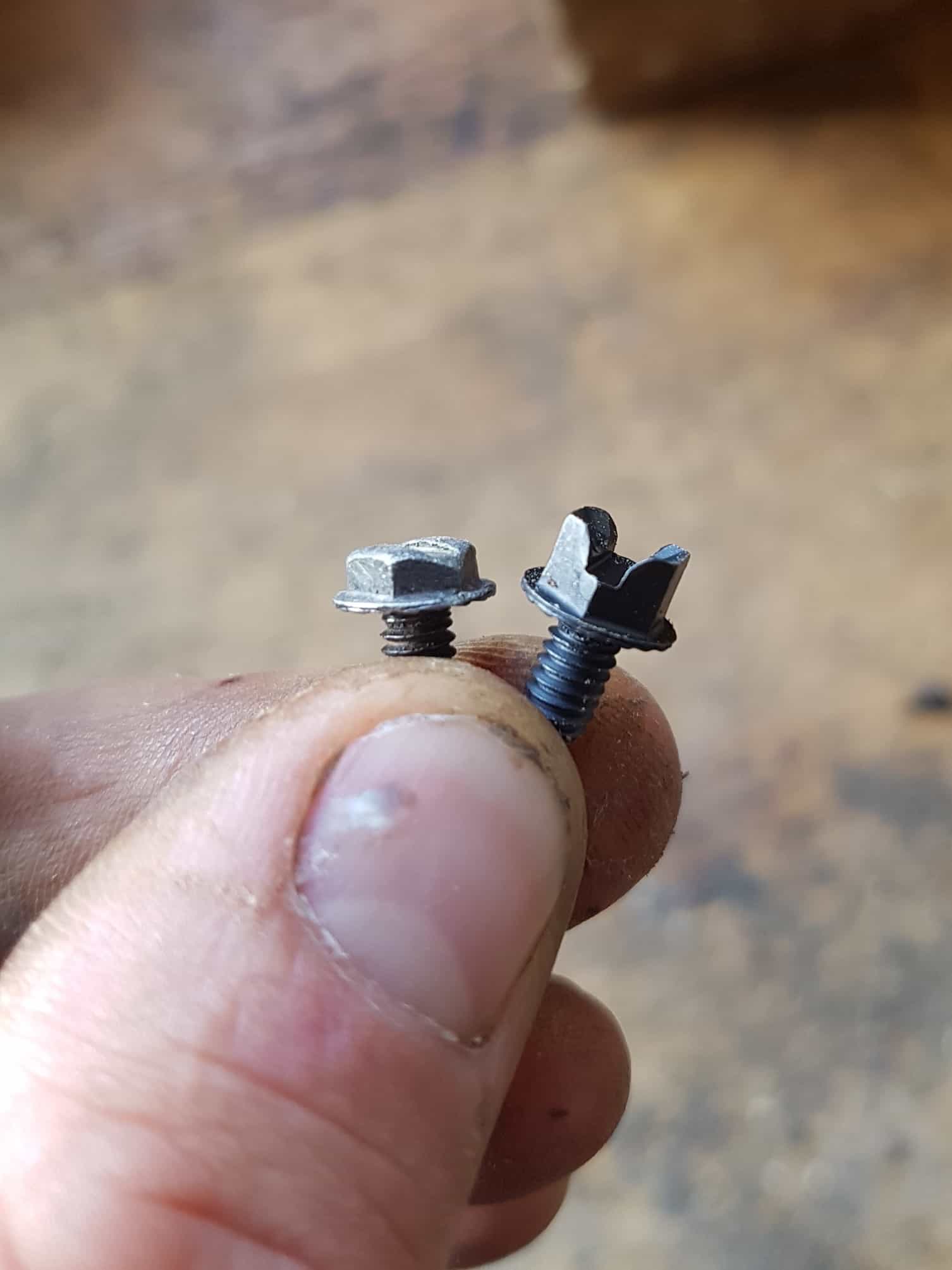 Old and new, the screw on the left shows about 2-3 months of hunting

I immediately ordered myself a bag of the 3/8ths screws. The Screws themselves are a hex type screw with a tight fine thread with a very sharp-edged head. They do come in various lengths but for obvious reasons I went with the shortest ones I could find.

To be honest these sat in the cupboard for a few months as I had other things I was working on but finally after getting my hands on some new Scarpa boots and with snow on the hills I set about fitting some of these screws, much to the amusement of my clients and guide. Fitting is pretty simple, just screw em in and away ya go. Adding glue, I think is a good idea and how many and where you place them is entirely your choice. 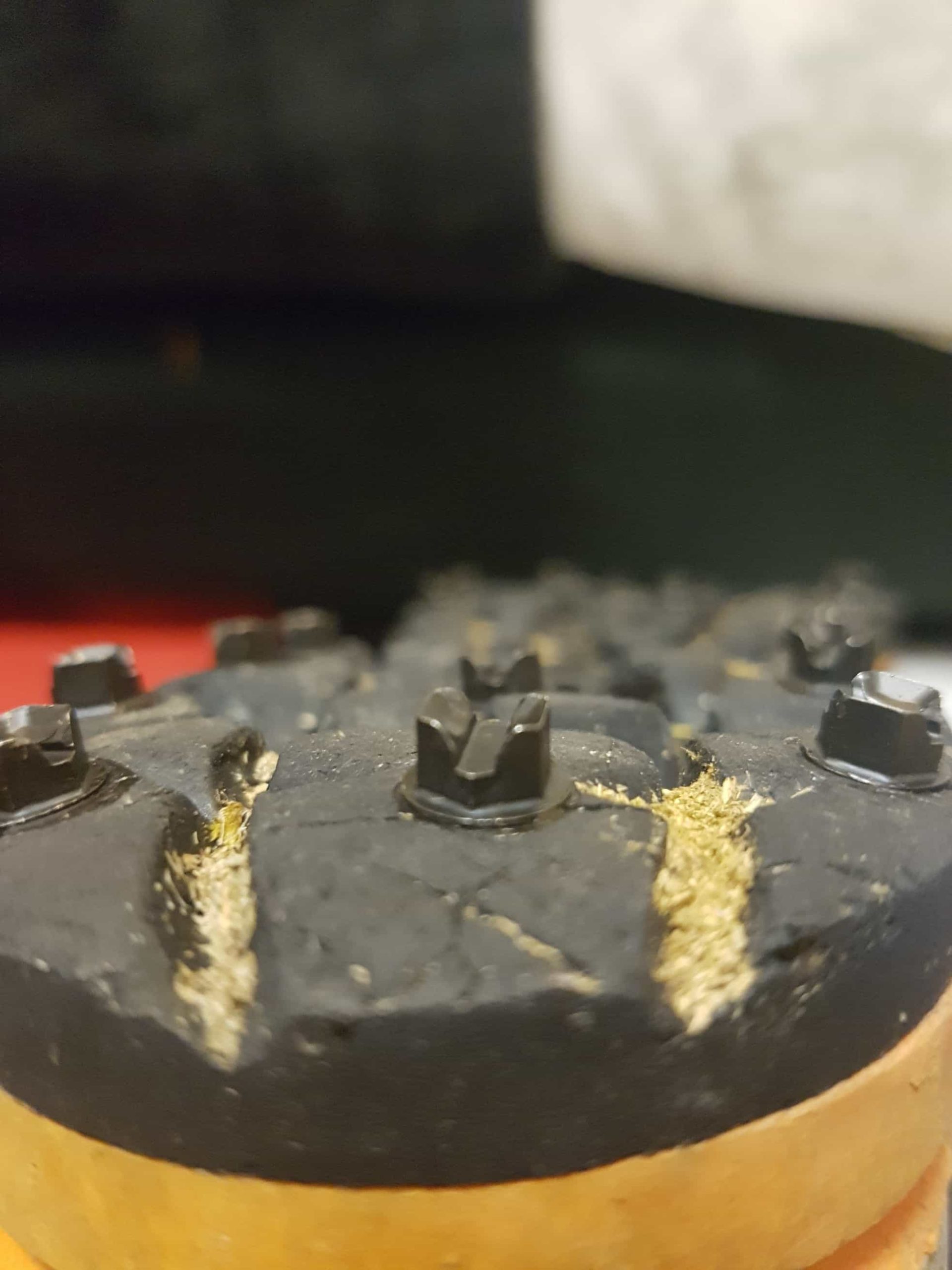 Ready for Tahr country! I ended up with nearly 30 Screws per boot in my first fitting

The first things you will notice with Kold Kutters on your boots is you are a little bit taller, and that these things really grip! I mean they bite into the ground like nothing else. On pavement and the like, they are little funny to walk on and not really the best for the nice carpet in your mums living room. But in the hills, they come into their own. My main worry of these was that on dry rock they would be very slick and not grip at all. I was very impressed to find quite the opposite and I found screwed boots to offer far better traction on ALL surfaces I wore them on.

My first ‘test hunt’ for these boots was 10 days of winter Tahr and Chamois hunting based out of a lower altitude camp due to a ‘varied’ weather forecast. This meant we left camp every day within the bush line and made our way through bush then scrub then up into the open tops, often in the dark.This meant I got to test them over a wide variety of terrain types and varying conditions, from sunny days to heavy rain and snow. The Kold Kutters very quickly gave me a lot of confidence in all terrain. Those big black slippery logs and tree roots you try to avoid were no issue at all. Frozen creek beds were a breeze and even on solid dry rock I felt like a real Mt Goat, the Screws really bit into the terrain.

One day I took a bit of a fall which is quite unusual for me and quickly found I was losing screws and traction fast! By the end of the hunt the Kold Kutters were all but gone, with only a couple left on each heel. 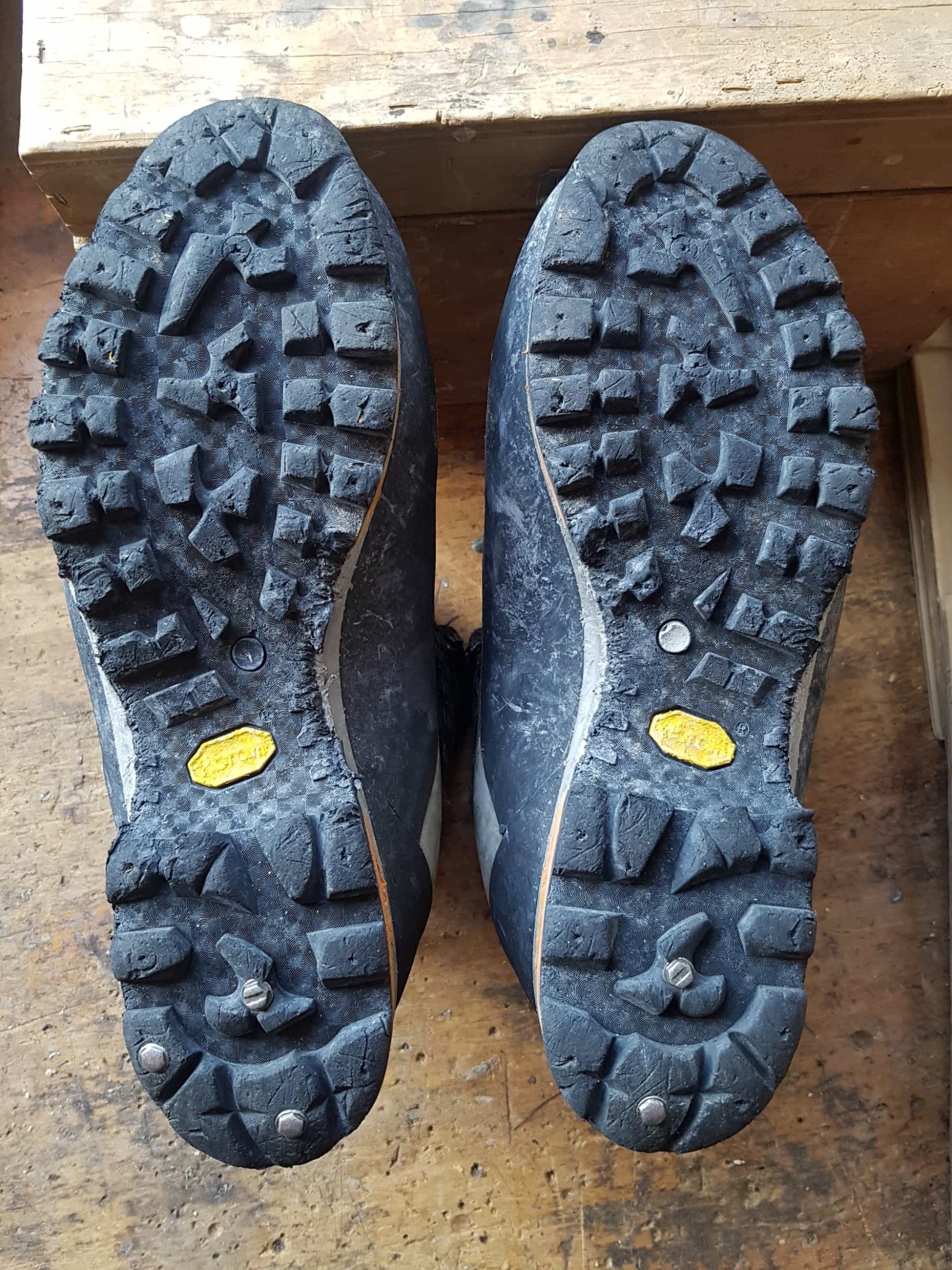 This left me a little disappointed. The screws worked amazingly when I had them, but not lasting a week in the hills is not a lot of use. I did add some basic glue to the screws when I fitted them, but I will be trying some 2-pot epoxy  to see if that helps. I feel this will also depend on the boot you use and type of rubber in the sole. The boots I used have quite soft grippy sole (Vibram® Total Traction) and maybe a harder sole is better? Also I think I could use a 5/8th screw and get further into the hard base of the sole. Obviously there is a fine line between the screws being to long, but knowing what I know now I would recommend some careful measuring and try and fit the longest possible screw.

I think ‘Kold Kutters’(or other similar screws) do have a place in the mountains, if you can get them to stay in your boots they can offer real advantages in most conditions. They are relativity cheap (I think) and come in packs starting of 250, so offer easy back up and replacement as they wear out. I think these a worth a look if you find yourself skating around on icy rocks regularly or even if you are a bush hunter and want some better traction on wet and slippery logs (most forestry boots have some form of spikes for good reason).

Please note these ARE NOT a replacement for crampons and not intended as such. Use common sense in the hills and YOU and ONLY YOU are responsible for your safety. If you are going to be in ice/snow conditions you should have crampons AND an axe with you always. 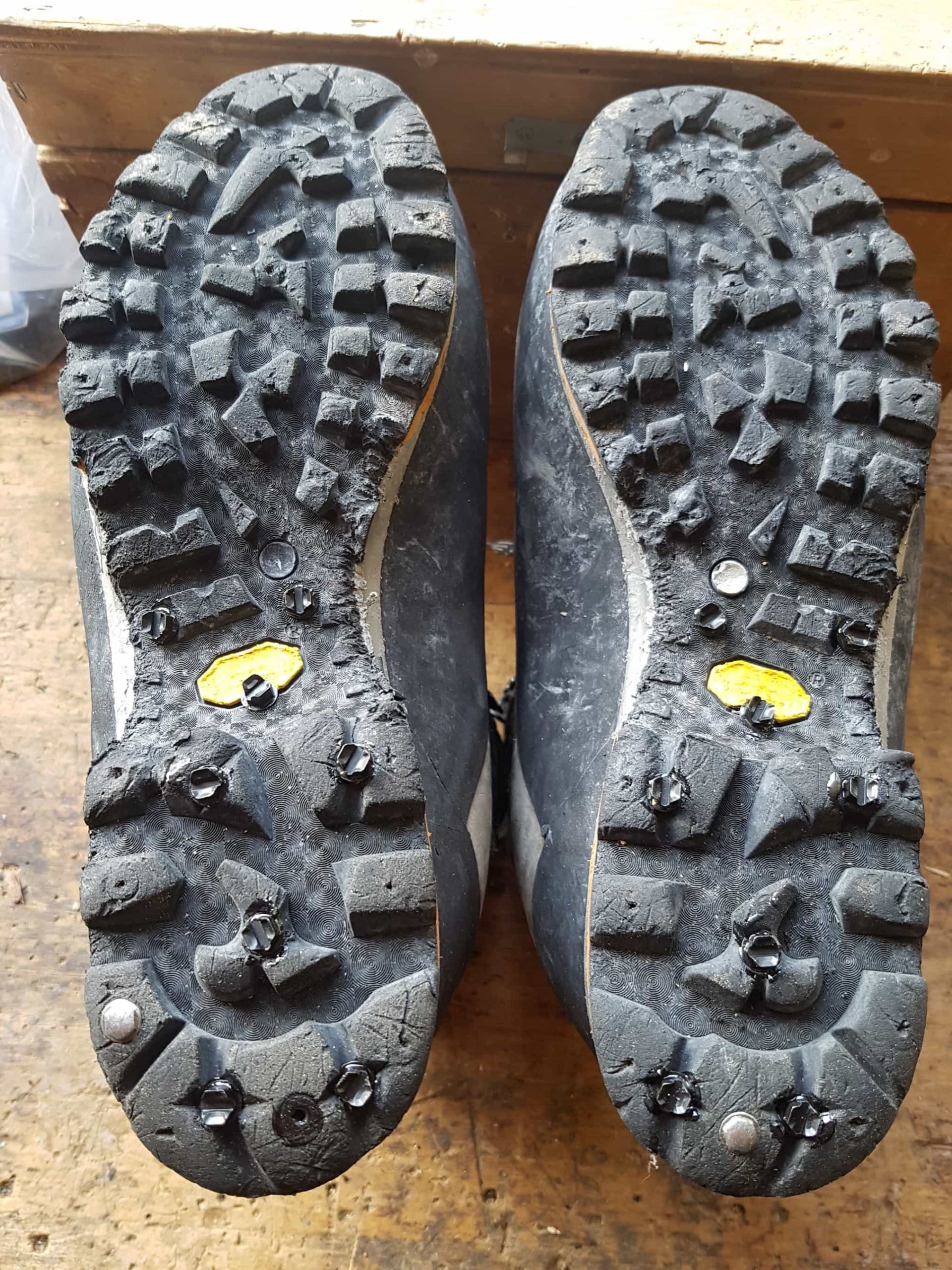 New pattern I have fitted for the spring/summer, 2 pot epoxy glue and slightly counter sunk into the sole. Hopefully will last abit longer!

Keeping your feet warm and dry is essential in the mountains and a lot of use do not have insulated boots (myself included) as we often use our boots all year long and for a variety of tasks. Here’s a few tips I have learnt over the years for slightly increased comfort levels.

Socks are very important and I wear two pairs over winter, I go for as close to 100% wool as I can find and make sure boots are roomy enough for two pairs.

Insoles get talked about a fair bit and I normally run just the standard ones the boots come with, or even none at all. This winter I went with full sheep skin in soles and did notice quite improved warmth.

Snow build up in the tongue/lace area of the boot can result in heavy, cold and wet feet. A simple piece of foam pad can be cut to fit behind the laces and help prevent this. 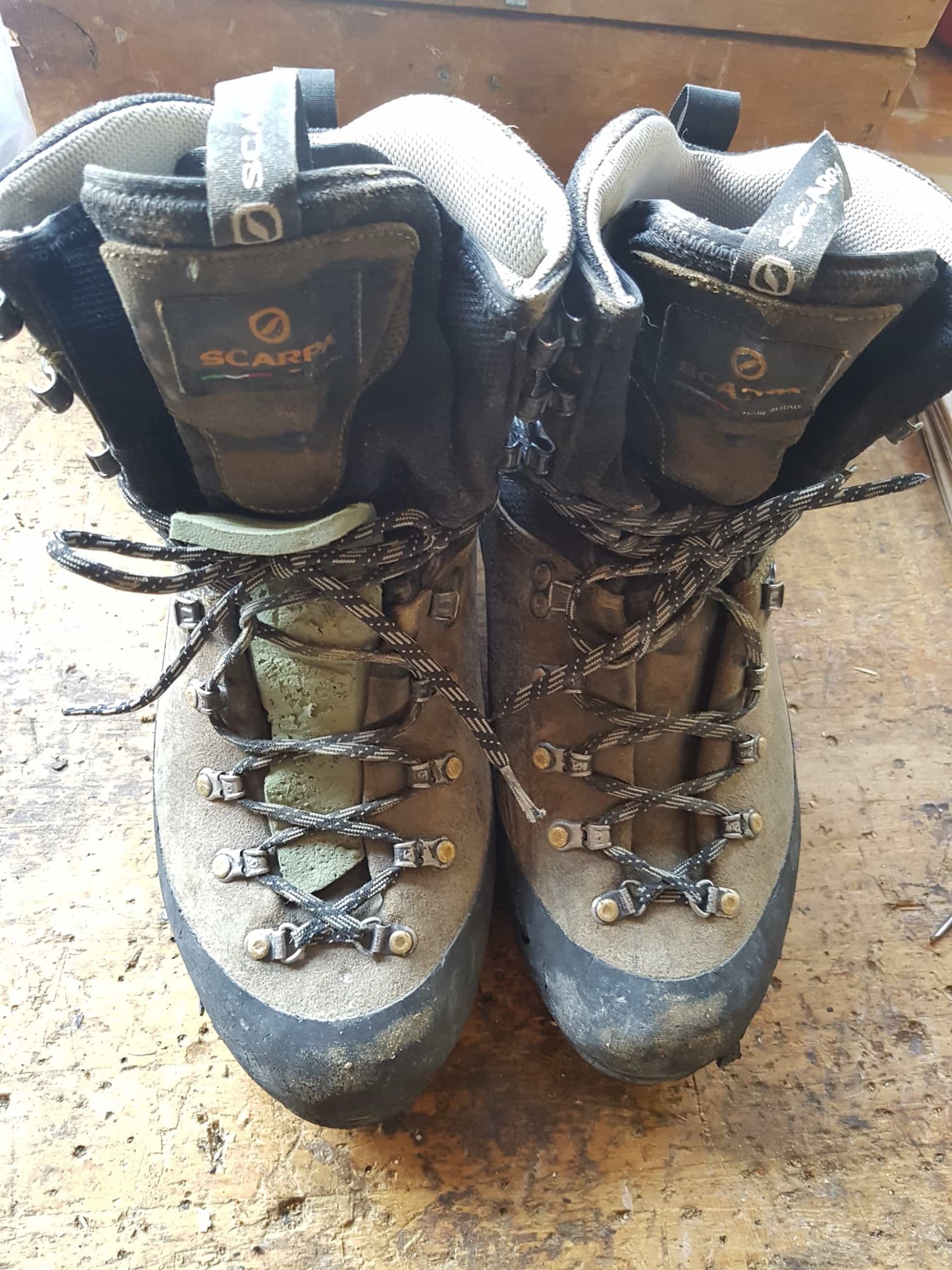 Once your boots are wet and cold it can be a real challenge to dry them, rotating socks and then drying socks in your sleeping bag (or a fire if possible) dries them faster than trying to dry the boots themselves. Another trick is using Nalgene water bottles as heaters to dry and warm them from the inside. The CLEAR Nalgene’s will handle boiling water, the coloured ones tend to not handle it so well……

Nothing warms you up like walking, so if you are getting cold get moving!

Please note these ARE NOT a replacement for crampons and not intended as such. Use common sense in the hills and YOU and ONLY YOU are responsible for your safety. If you are going to be in ice/snow conditions you should have crampons AND an axe with you always.