Tahr and Chamois are undoubtedly a couple of the hardest animals to judge, small horns to body ratio and the fact only an inch or so can separate an ‘average one’ to a ‘trophy of a life time’ . Often we are only talking in fractions of an inch when it comes to these species and this is where a spotting scope,patience and an eye for detail come into their own. (and a good guide!)

It’s easy to tell a good stag from an average one, but when you’re talking only a couple of inches between a representative bull Tahr and a monster, you really need to know what to look for. To compound the problem in the rut a bulls mane is often covering the tips of its horns. When they are posturing you can barely see them! This is when you need to play the waiting game. Put the spotter on him and watch until you get all the angles of view on those horns to make a proper assessment. Get in close enough and you can count the age rings. For a bull to be mature you are looking for seven years old and over.What is considered a ‘trophy’ depends alot on who you talk to, but most Tahr hunters will agree that 13 inches is a pretty good standard for a ‘trophy’ bull. Most top trophy bulls are in the 8-10+ year age bracket but there are some monsters shot at a young age, I have seen 4/5 year old bulls in the 14″ class, imagine them with 6-7 more years of growth!

You’ll need both a side view and a front on view. The front on view is going to give you a view of the width and sweep. If the tips don’t look like they sweep in and point back inwards, chances are he’s only going to be an 11”or so. 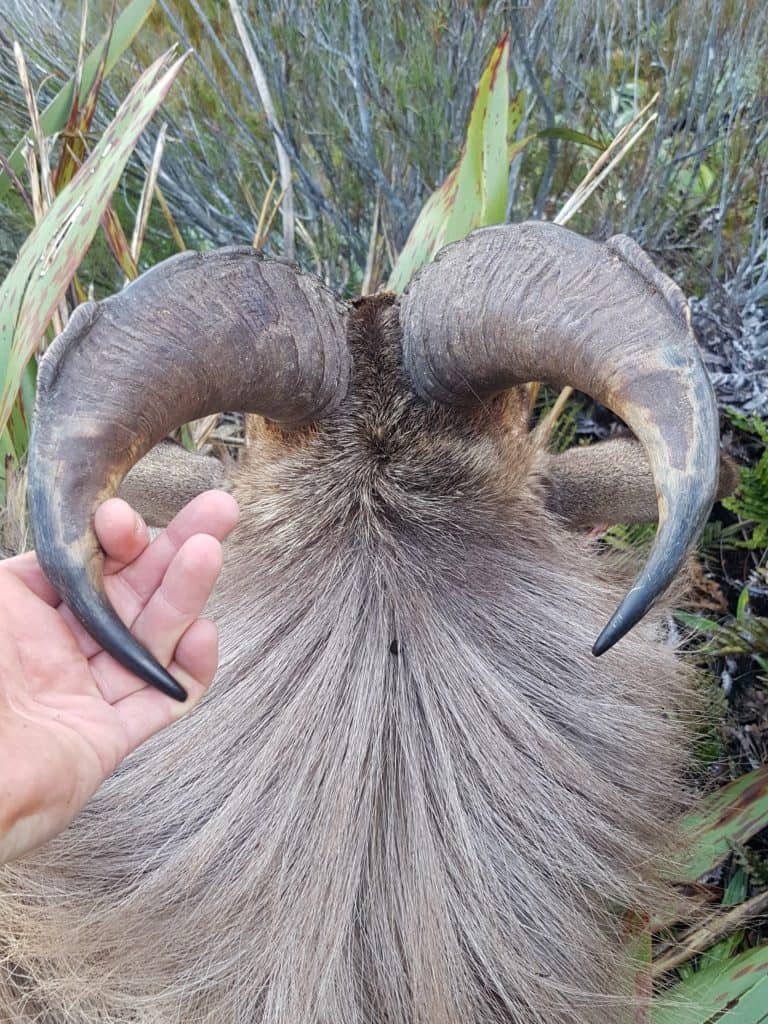 You will also be able to see the condition of the tips and whether they are broomed or broken. Bulls vary in the width of their horns but the wider ones tend to be bigger. Width wise we want see horns come out towards the end of his ears and then curl back in, this is best viewed from the front, from behind they always look bigger than they are. As for the side view, you can again see the condition of the tips as well as the overall length of the horn. One method I use is to take the width across the base and make a square on the horn (see the picture and it will make sense). If you can fit nearly two of those squares on the horn before it starts to curl and taper, it’s likely a good size. I find this method quite hard to use, it does definitely work but can be very difficult to put in place on an active animal, or one far away. 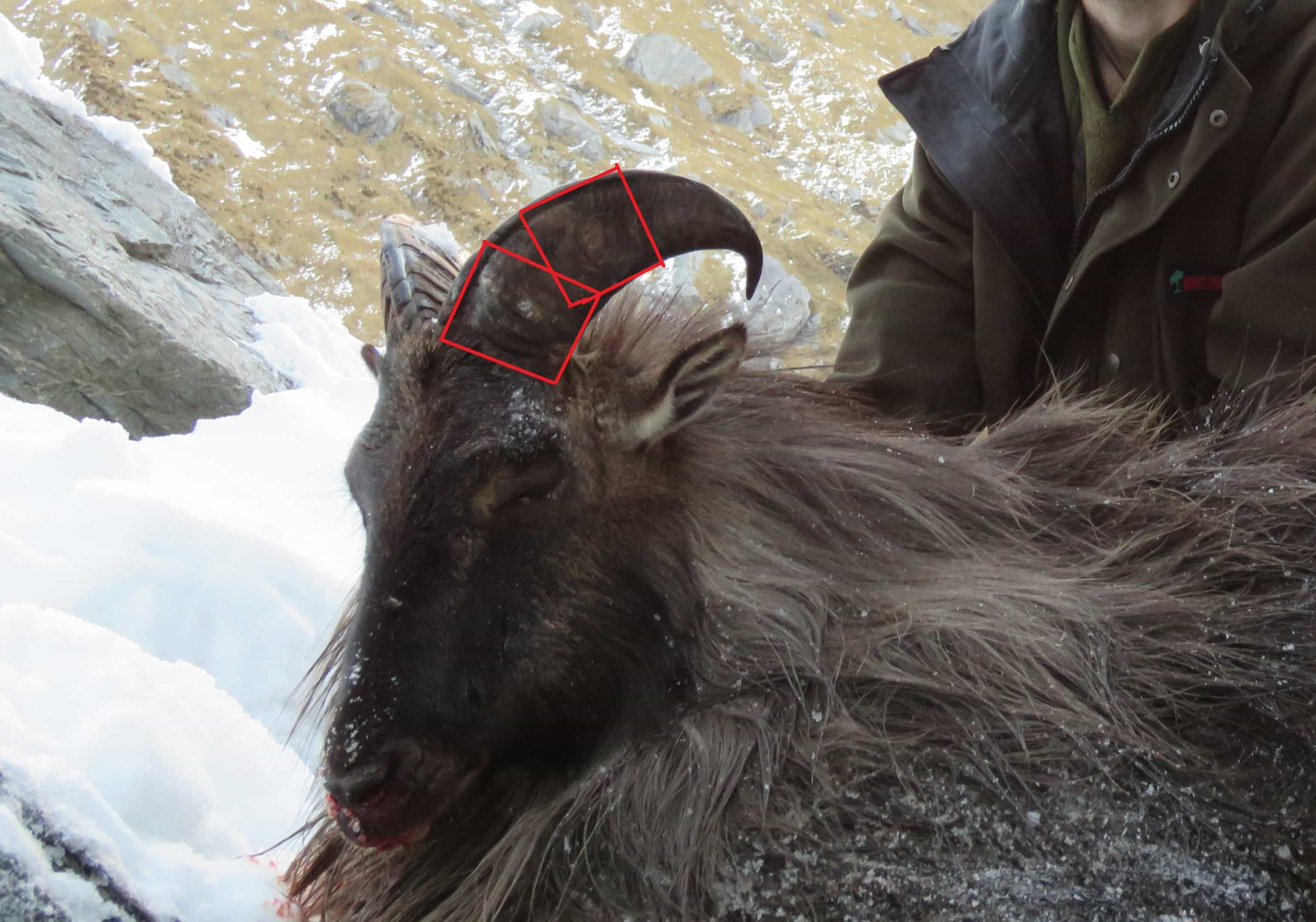 A 14″ 8 year old bull, showing a solid 2 squares. From the base the horn extends almost twice as far as the base before it begins to taper. 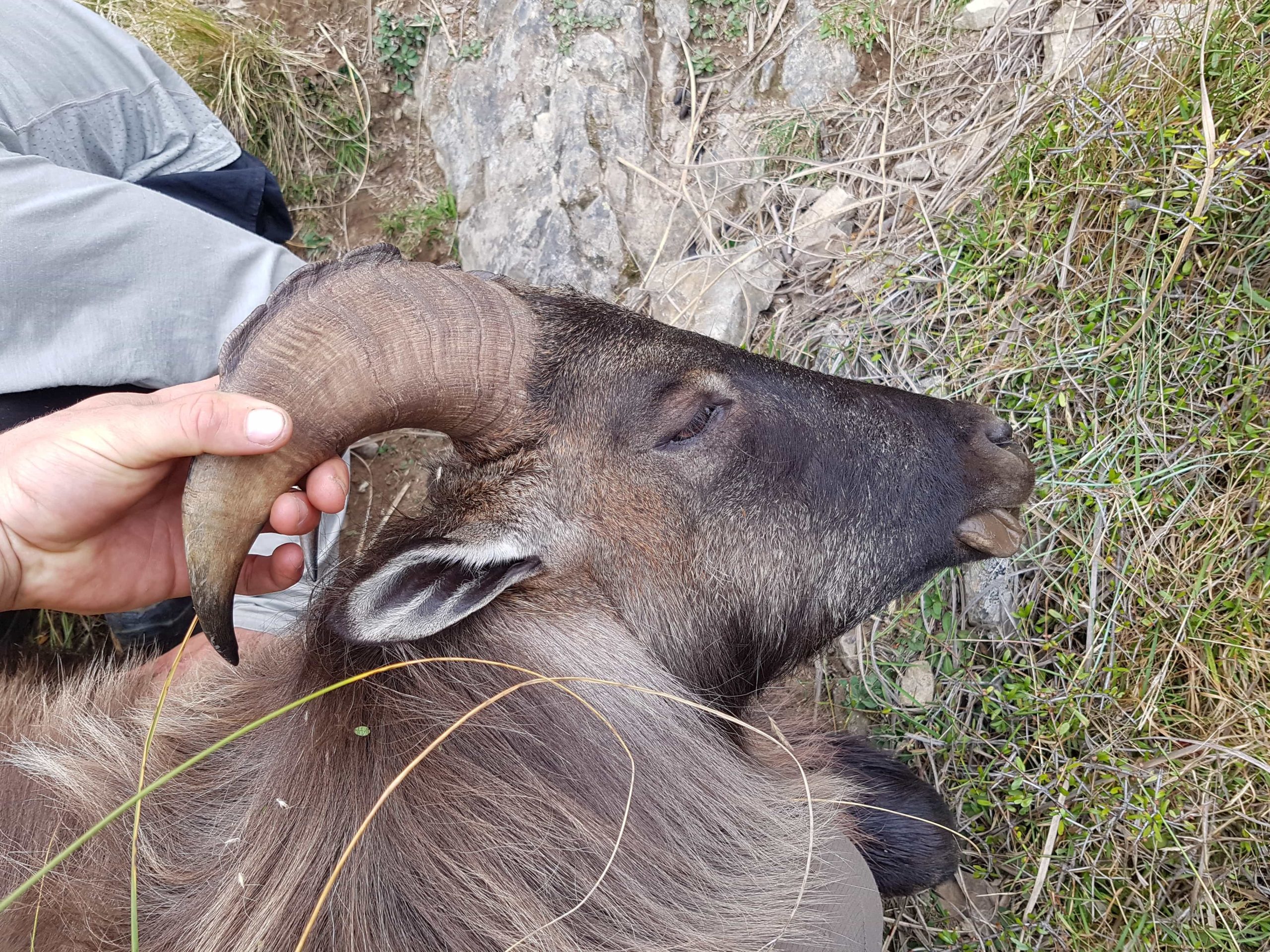 Another 14″er with a lot of mass. can you see two squares???

Another method is to compare the overall length of the horn to the overall length of the skull. On a big bull, they will be similar. This is quick assessment you can use when at close range or in a hurry and gives you a good benchmark to look at other clues on size. The bases are another factor. If they look small they probably are. Don’t get caught out by small bases which seem to make the horns seem bigger. This is where the skull length comparison is great. The coat of a bull helps to determine his age too. A mature bull with have a mane (we’re talking winter hunting here) that will appear to reach back ¾ down his body. Long and pronounced dorsal stripes can be a good indicator too. I wouldn’t get too hung up on the colour of manes as an indicator. I’ve seen big bulls that were just completely black but for some people, a bull Tahr coat is the real trophy and there’s nothing wrong with that. In the spring and summer the coat doesn’t get in the way so it’s far easier to do a horn assessment. If you combine all these factors and they are all there, you’re likely looking at a 13”+ bull. As with stags, you can get character trophy’s. A really old broomed bull with stacked growth rings is nearly as good and maybe more interesting than a really long one (exception being if its old and long!). One of the oldest bulls I have seen was 13 years old but only 11”. Difference to all the other 11” bulls that get shot is that the fella who shot it knew exactly what he had the rifle pointed at. A one horned bull is another example. I’ve seen a few of these and my guess is because they have taken a fall at some time in their life.

Josephs extra notes:Broken ridges will affect the length of a bull(and his bases) quite a lot and can very hard to see in the scope. most of these bulls with broken ridges will be older(8+) so you cant have it all. My focus is always to find the oldest bull I can. Older bulls have Better skins AND generally will be bigger in both the horns and body/skin size. Bulls keep growing until they are 6-7 years old and generally only keep getting better with their capes after this. Body size and cape size are good indicators of age, then you will need to get into around 200-300 yards(closer is better) to see the age rings well. When you can see some stacked ages rings you know its a shooter. Any bull in the 10 year+ category is a trophy in my books regardless of size. Finding a bull that has lived this long on public land with unrelenting foot and helicopter hunting takes patience,skill and a little bit of luck! 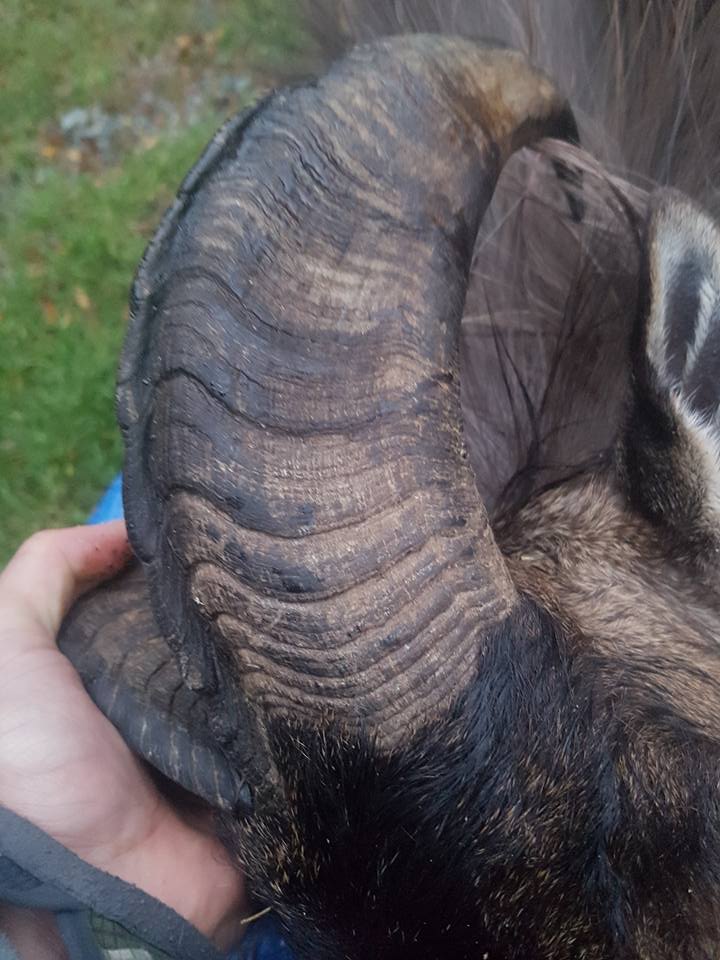 And then there’s Chamois. The first thing to figure out is how to tell the difference between a buck and a doe. Without looking at the horns, the body will be a pretty good indicator if it is a mature buck. As with Stag and Bulls, they are just heavier in the front end. A doe’s horns may be high, but they will always appear skinny and have a far less pronounced hook. The ability to tell what a skinny or fat chamois horn looks like may just come from looking at a few. After that it should become pretty obvious. 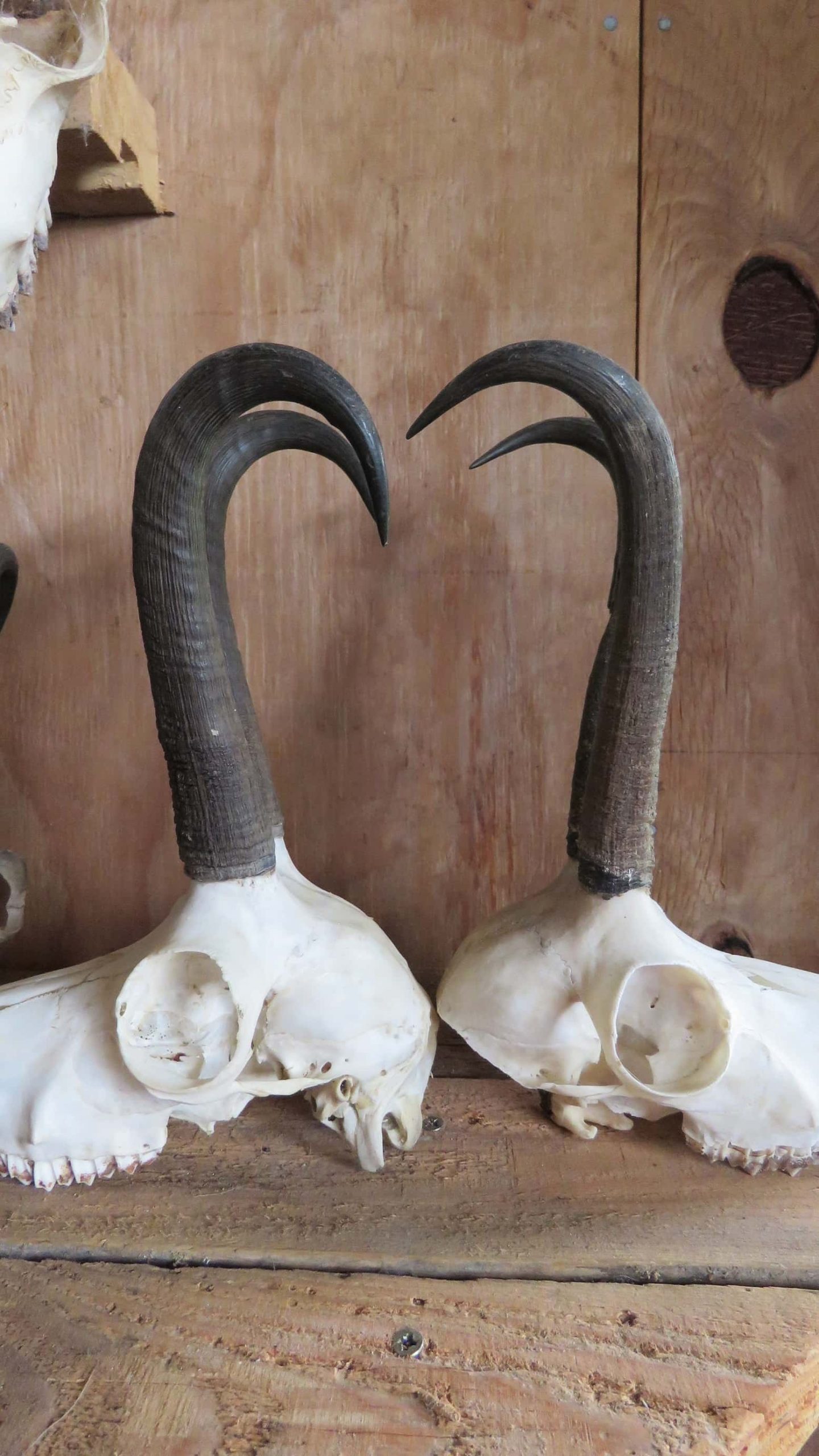 Chamois horns come in all shapes so can be tricky to judge. Again make sure to spend the time looking at him to get the different angles. My method is quite basic, but it works. There are usually three factors, the bases, length and hook. If a bucks horns appear twice as high as his ears when the ears are upright, sit tight and keep watching. The hooks on a buck are often where they pick up a lot of their length. A wide, deep hook is what you are looking for. The hook should come back down about a third of the height. But there are always exceptions. Some of the bigger bucks I have seen initially you wouldn’t think are that big. They don’t have much height to them but instead have a massive hook that comes back down over half the height. 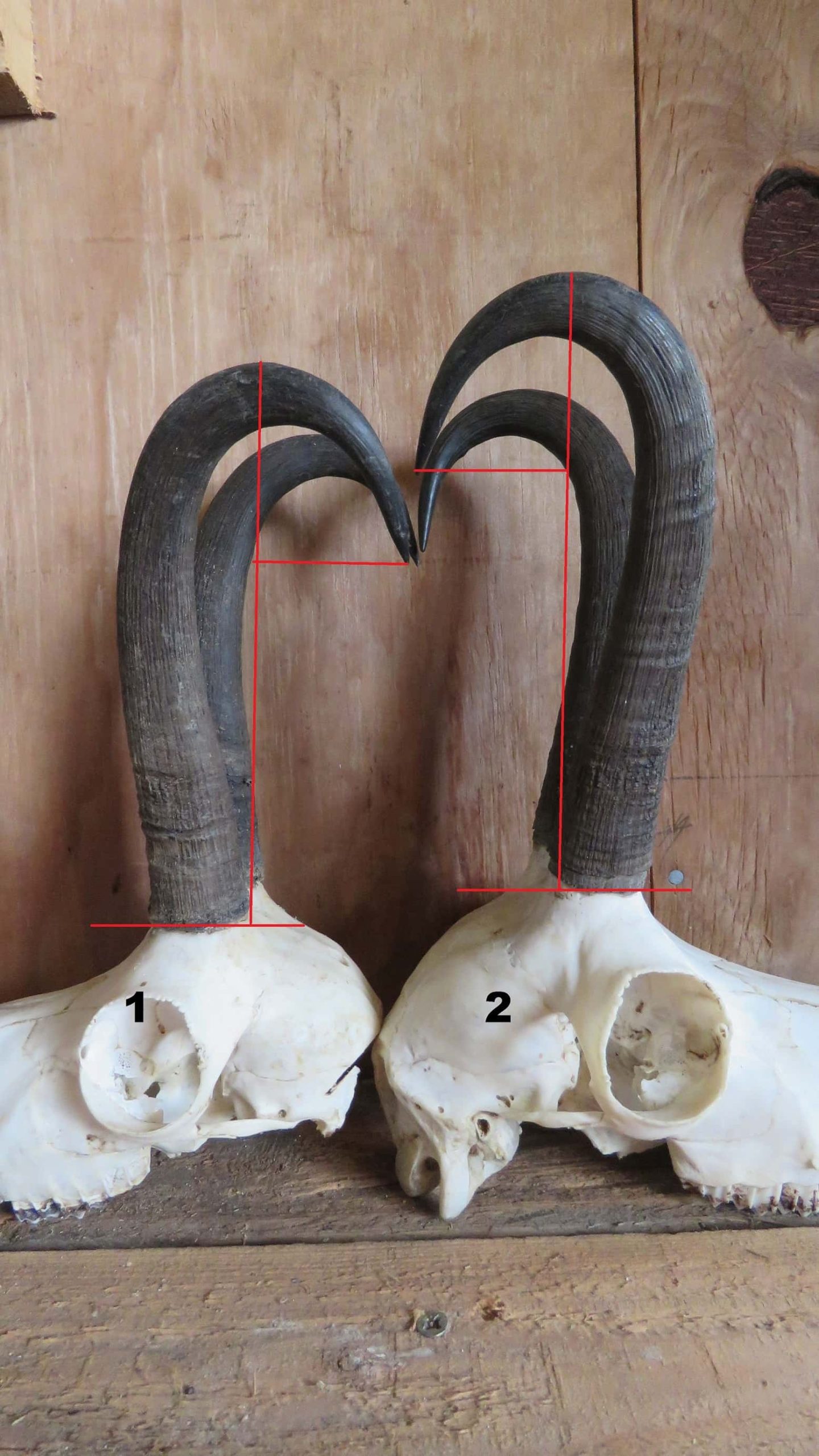 Again you need to take into consideration the body size of your assessment. Think again of the lanky teenager that’s no quite filled out yet. I had a disappointing experience of taking a younger animal which exhibited all the traits horn wise of an excellent buck. What I failed to do was assess his body size and ended up with a younger animal that likely would have gone on to be an absolute monster. 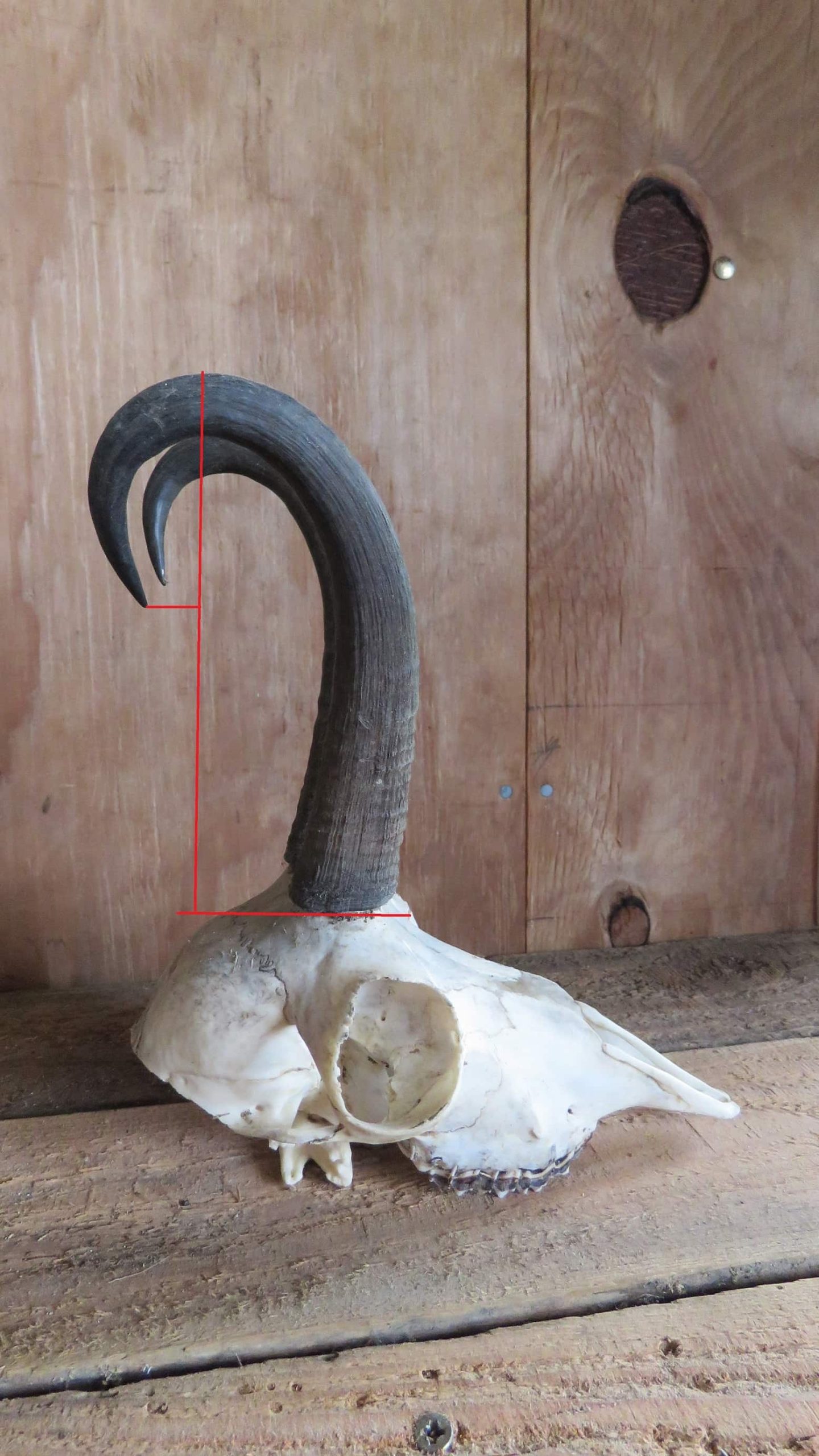 The young buck in question, note the small skull size.

Once again there’s the odd character trophy to pick up. In chamois, these usually are the one horned bucks. They may have lost it either to a fall, or more likely (at least on the coast) horn rot. I have one on the shelf that goes 10 ½” but only has one horn. Interestingly he is very high with a small hook. 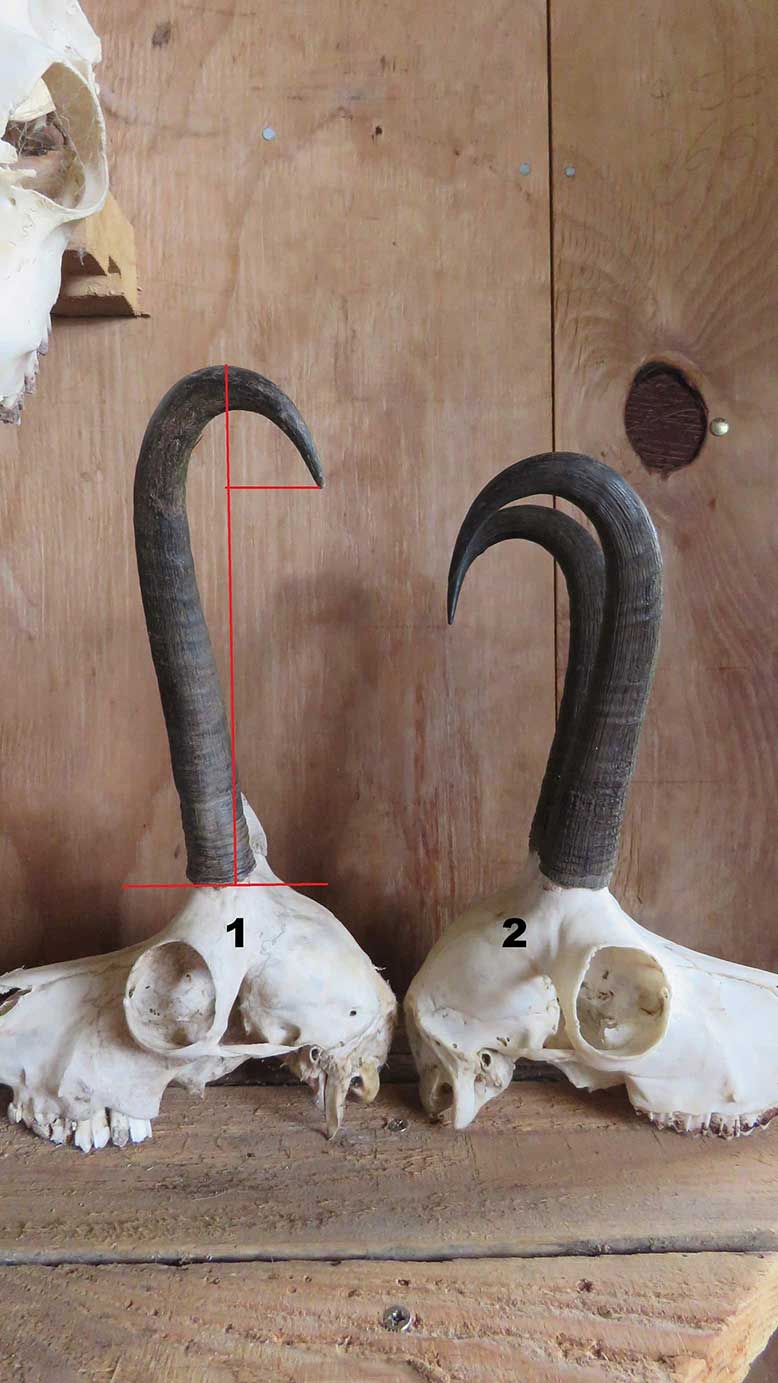 #1 the one horned 10 1/2″ buck compared with a ‘typical’ shaped 10″. Small hook but very huge height compared to a more typical shape.  You can also see his tightly packed growth rings at his base.An Old animal for sure.

Those are the things I’m looking for when I’m after a trophy animal (for these species anyway). It’s fair to say that after a while looking at any of these animals the old saying “you’ll know a big one when you see it” definitely applies. It is however important to remember that a trophy means different thing to different people. The hunting resource that we have in New Zealand is pretty fantastic. There’s always people bagging the way our game animals are managed and to be honest, you could say many of them have suffered miss management. It’s easy to blame government agencies here and rightly so, but there some hunters are to blame too. How about we stop shooting the small ones and we’ll start to see a few more mature animals. Things may change in terms of hunting and animal management in the near future so I look forward to see what happens. Getting into that topic is a whole other kettle of fish!